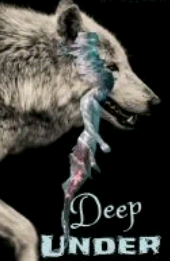 Mates of the Ocean Series: Book One.
Aquarius is a merman. He lives in the ocean, helps his tribe out, and enjoys life as much as he can. Being in his tribe is hard though, especially when he must see all the happy mated couples. Eventually enough is enough and he leaves the safety of his tribe to search for the other half of his soul.
A stormy night changes his life forever as he is swept away, into a world he has never been in before.
Can a werewolf and merman love each other?
With the stress of hunters, pack duty, and unexpected pregnancies- will Aquarius get his happily ever after?

Deep Under {ManxMan}, by_A13XA_, is brought to you by MatrixglobalCorp!

Leaving my tribe was hard. After spending 547 years of my life with them, they were all I have come to known. All my life I have been taught to never stray far from the tribe. The tribe would keep me safe, keep me well and fed.
but now I have left.
I was on my own in this big vast ocean. Predators like sharks or stinging box jellyfish were my worse fear.
Those could kill me before I could find him.
My mate would no doubt be male since I am a breeder. I was small and slim unlike most male merman who were large and brawny. I resembled a mermaid more than a merman. I had pale skin, a tiny and slim figure, and dark curly brown neck length hair.
My features were more feminine than masculine as well. I also had female reproductive organs on the inside as well as male reproductive organs on the outside. This meant I could bear children for my mate.
Before I left my tribe, many males had tried to court me with luxurious gifts and promises, but I declined. I only wanted the person who was made for me, my other half, my mate.
I thought the idea of mates was romantic, the idea the gods had made someone who bares half your soul. Your other half- your missing puzzle piece.
I looked all over my tribe when I came of age, even waited an extra hundred years after I came of age to see if they had not yet been born. Sadly, no one in my tribe was the one. I sensed my mate was alive somewhere though, years ago I felt a shift in my soul. I was older than my mate but that did not bother me, as I hoped it would not bother them.
I swam through the cold water enjoying to bubbles that hit my face from the speed. I felt bad for leaving my tribe, but I knew it was best. I could and would find my mate out on this journey. I was not destined to live eternity alone, if the gods would not bring him to me, I would set away and find him.
My tribe was small, as most were since mermaids and merman were a dying species. There were only about 70 of us, but it was home. I was safe with them and they treated me well. I will forever love and remember them but now it is time for me to find a new home and create my own family.
I had been swimming for a couple hours now, just following my instincts hoping to bump into another tribe soon.
I had a map in my pouch I had brought along with me. The next and nearest tribe we had known of was 90 miles away. My tribe was in what humans call the Caribbean ocean, the water up top was always nice and warm and bright. Merfolk tended to stay in the lower and darker waters to avoid humans, especially since they started to come deeper and deeper down.
It was night and the creatures down here were active. I was mostly afraid of bumping into a shark. I had nothing but a knife and some net to defend myself with. I could out swim a shark easily, but one bite and I was dead.
Mermaids and merman had special powers as well, it was forbidden to use them unless in war or immediate danger. Mermaids had typical stuff like the siren call and sea-witchcraft. Mermaid could manipulate the water elements and if you were strong enough the weather.
Since I was a breeder, I could manipulate the water to a degree and had practiced some witchcraft as well. I did not want to harm the animals though; it was not their fault for hunting- but it was always my life against theirs.
After a while of swimming I grew tried and decided to find shelter for the night. I spotted a tiny cave covered in coral and sponge. It would keep me camouflaged for the night.
I set my stuff down and yawned. Tomorrow would be a new day and I promised myself I would make ground in search of my mate. He was out there looking for me, I could feel it.
With that happy thought, I closed my eyes and smiled, happily drifting off the sleep.