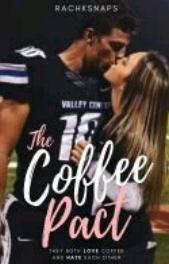 The only thing high schoolers Jake Carpenter and Mia Hope have in common is a mutual love for the coffee served at The Coffee Pod. But when Jake – Artwood High’s most popular quarterback – learns he’s failing English, he knows he needs to pull his grades up or risk being kicked off the team.
He strikes a deal with the elusive Mia – the quiet girl with secrets. If she can’t go without a single cup of coffee, she has to tutor him for free. If she can he’ll pay her triple, and with Christmas around the corner, there’s nothing Mia needs more than money.
But as the pair grow closer, Jake learns the real reason for Mia’s bad habit, and what starts as an innocent bet between enemies grows into something more serious. Can the pair survive the next two months with their hearts- and secrets-still intact?

The Coffee Pact☕By☕Rachksnaps🥂 Is brought to you by 009 Corporation.

Do wish for this story to continue 009 Corporation?

4 thoughts on “The Coffee Pact☕By☕Rachksnaps”