Caught In The Mission 🎭By🎭its-a-secret 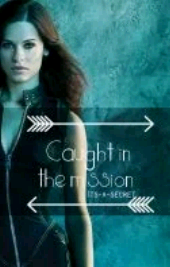 Julianna Watts and Alexander Roberts are two very different people who don’t see eye to eye. Their rivalry dates back to when they were children competing to be the best. Working from different secret agent organisation, both are ranked as the worlds best agents. Juliana and Alex are forced to work together on an undercover mission…A mission that was aimed to stop an illegal arms deal takes a different turn that places both agents in danger.
Alex and Julianna may not trust one another nor have the ability to work together, but when they learn that the people that they trusted are not who they said they are they are alone and have to rely on on another.
Secrets are spilled and lies are uncovered. Follow Juliana and Alex as they embark their journey.

Caught In The Mission 🎭By🎭its-a-secret, is brought to you by 009 Corporation!

by its-a-secret
* Disclaimer there is violence in this first scene read your own will*
The helicopter flew across the vast rainforest, the trees resembling small bushes from the height we were at. I looked out open door feeling the wind blow through my hair, a sensation I had grown accustomed to due to my lifestyle. I unbuckled my belt walking to the open door. Below me was the Genji river, it was a large river that flowed through the jungle of Hugandi Rainforest. There was my mark. It was simple, jump from the helicopter, land in the river, swim to shore and find their hide out. No matter how many times I had done these helicopter jumps I still felt butterflies in my stomach. Even spies get anxious every now and then.
“Were passing the waterfall.” Pete my pilot spoke over the headphones. I raised my hand gesturing a thumbs up at him before looking back at the river, just as he had said the waterfall was approaching us. I sat back down, strapped my parachute on and took my headphones off, replacing them with my ear piece. With my pistols hoisted in my waist, my knifes tucked away into my boots and my small rucksack containing my phone, small computer, bullets and backup pistol strapped onto my back I was ready.
I walked up to the ledge of the helicopter as Pete shouted that we were over the waterfall. I switched on my ear piece, before closing my eyes. “You’re ready to jump Julia.” A voice spoke in my ear piece. It was the voice of my analyst Zoe. She was the voice that guided me through my missions, and most of the time it was thanks to her that I made it out alive.
“Thanks Zee.” I shouted, through the loud propellers.
I looked down again seeing where I had to land. It was a simple jump, pull parachute and aim for the waterfall pool. I’ve done it millions of times. After taking a deep breath and saying a silent prayer I bent my knees and leapt forwards. The feel of the air around me as I lied flat in a star motion. My hair despite being in a pony tail flew in every direction. I brought my gaze down the waterfall getting bigger and bigger. I pulled the cord of my parachute and in seconds I was jolted up, my chest tightening from the sudden pull. My fall became slower as I slowly entered the rainforest. The trees that were once small hedges grew, my parachute became caught in one of the branches of the trees, I unclipped myself from it and fell into the pool beneath me.
I resurfaced, brushing my hair from my face. I quickly swam to the bank checking now one was watching me. I hide in a couple of bushes and laid on my back as I caught my breath. “Zee I’m on land.” I spoke breathlessly.
“You make everything sound easy.” She joked.
“It’s harder than it looks, trust me.” I answered sitting up and pulling my backpack off my shoulder and rummaging for my mini computer.
“The cabin is 0.5 miles north from where you are, the radio images are picking up some surveillance cameras and a couple of guards around the perimeter. So be on the look out. I’m transferring images to your computer now.” Within seconds inferred images of the cabin popped up on my screen. Three bodies were detected, they looked armed and ready.
“Three isn’t so bad.” I smirked.
“Three armed guards outside, we don’t know what’s inside.” Zoe reminded me.
“Well come to that when the moments right.” I replied packing my computer away. I placed my rucksack over my shoulder and began walking north. I had to be attentive to my surroundings, the slightest sound of a twig breaking caught my attention. But most of the time it was a small creature lurking around. I kept my hand on my pistol as I walked, ready for any one. My body suit was luckily drying off due to the heat, but my hair stayed stuck to side of my face. “Hey Zoe.”
“Julia.” She answered.
“You never finished telling me about your date last night.” I said, smiling but kept my attention on the rainforest around me. The only sound of birds and tree branches was heard above me.

🎋  Zoe let out a small laugh, even though I couldn’t see her I knew she was laughing. “I don’t think now is the best time to tell you about my evening.”
“Oh come in, I’m walking through a rainforest about to go rescue some politician and you won’t entertain me.” My mission was to go to the cabin, secure a hostage, an American politician with secrets of the use military was kidnapped a few days ago and I was sent to go save him before he spilled anything. His capture were hoping of a ransom but were up for a surprise. “Come in tell me it ended with a Big Bang.” I silently laughed.
“Big Bang indeed…” she answered trying to hold back a laugh. “But I will not tell you about it when you’re less than 40 steps to the cabin.” I rolled my eyes before ducking down to the ground, grabbing my pistol from my hip. I crawled up to a rock that gave a clear sight of the cabin.
It was a small cabin, a stairway at the front, a door in the centre with two windows on either side. The exterior looked old and warm out, probably due to the never ending rain. As Zoe had said there were a couple cameras posted, one on a nearby tree, another on a lamppost outside the cabin and another just above the door. “Can you take them out?” I asked.
“Like you have to ask.” She confidently answered. I rolled my eyes waiting for her confirmation, it came seconds later. I check my rounds in my pistol before placing my silencer on. My first target was the guy walking closer to me, he was a couple of yards away his hands placed by his belt where his gun laid. He wore a black t-shirt, black trousers and the oh so famous evil henchmen shades. Can this be any more ironic? I asked shaking my head. The guy was circling the areas furthest from the cabin therefore taking him out would be better as his co-workers wouldn’t see him.
I aimed my gun, squinting my left eye and sticking the tip of my tongue out. As he was moving I had to calculate where his next movements would be. I caught on to his pattern and pulled the tricker. A small but not unnoticeable sound let out as the bullet went to the centre of his forehead. He fell to the ground, landing on what thankfully was a pile of leaves. Silently proud of my aim I moved closer to the cabin. Unlike before two men were patrolling the entrance, one just underneath the stairway and one by the door. Great.
Again I aimed my gun, left eye closed and tongue sticking out. With one shot the guy at the stairwell fell to the ground getting the attention of the guy stood by the door. Similar to the first guy I shot they were all wearing black clothing with black shade. The guy by the door banged on the door notifying the people outside of his arrival. Exactly what I was avoiding! I whispered. Seconds after the bang another henchman walked out the door to join the guy already out there. I rolled my eyes.
“Zoe how many are inside?” I asked aiming my gun at the two guys outside. They had their guns out at the ready but were unsure were to point them. I was at an advantage.
“Four bodies inside. Two sat on chairs and two standing. I think Mr Louis is the one sat by the window.” I thanked her before pulling the trigger twice. One by one the two henchmen fell to the ground. One fell backwards into the door, possibly alarming those inside. “Okay you have one stood by the door and another stood by the window.” Zoe warned me. With another thank you, I took my silencer off and threw it on the ground before jumping to my feet. I placed my rucksack on the ground too but clipped some billet rounds onto my belt. “Good luck.”
“See you soon.” I said to my ear piece. I took a long breath and brushed my drying hair out my face. Now or never. I thought it myself.
I ran to the cabin being attentive of any hidden henchmen. As I climbed up the stairs a shot was fired in my direction from inside the cabin. The bullet missing me millimetres. I swore out loud as I ducked. I brought the gun up in the air and aimed it at the door and fired a couple bullies. This only fuelled them. I crouched down and crawled to the door, pushing the body from the guy before out of the way. Lord let me get out of this alive.

Hello guys, I hope you enjoyed this chapter! What country are you reading from? Do you wish for this story to continue on 009 Corporation? Please drop your Message below.

8 thoughts on “Caught In The Mission 🎭By🎭its-a-secret”